Equestrian Statue at Newby Hall. Formerly in Cornhill and the Stocks Market in London. 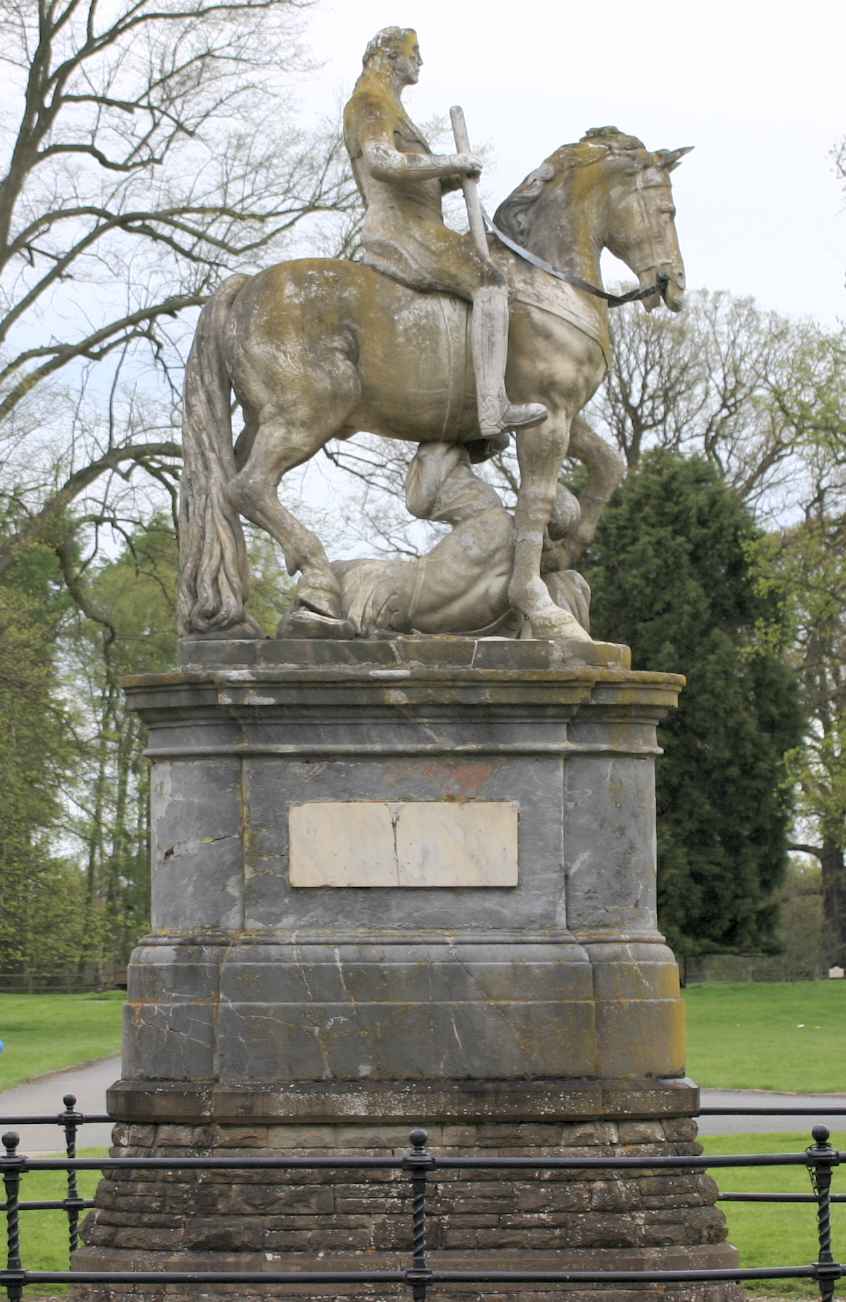 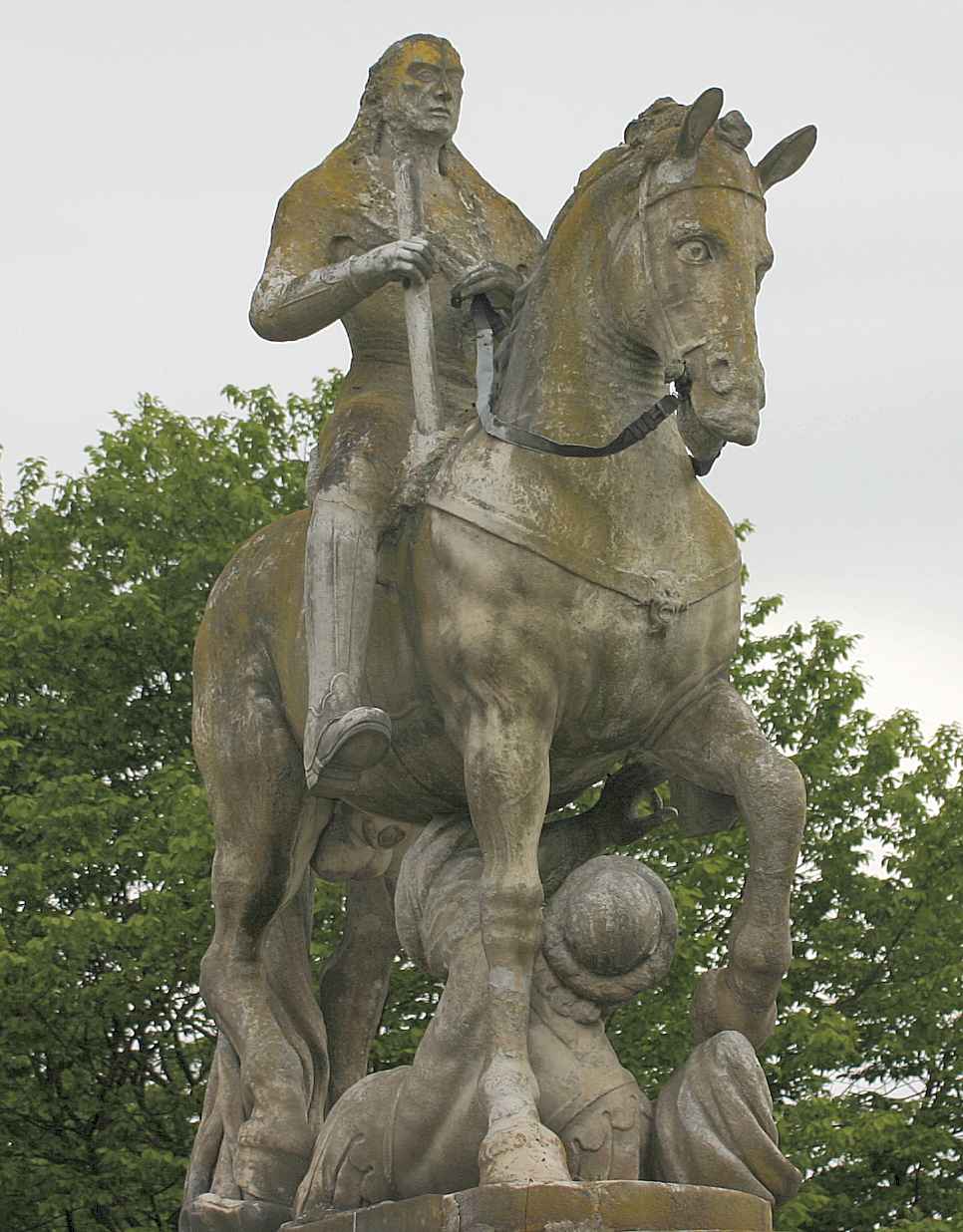 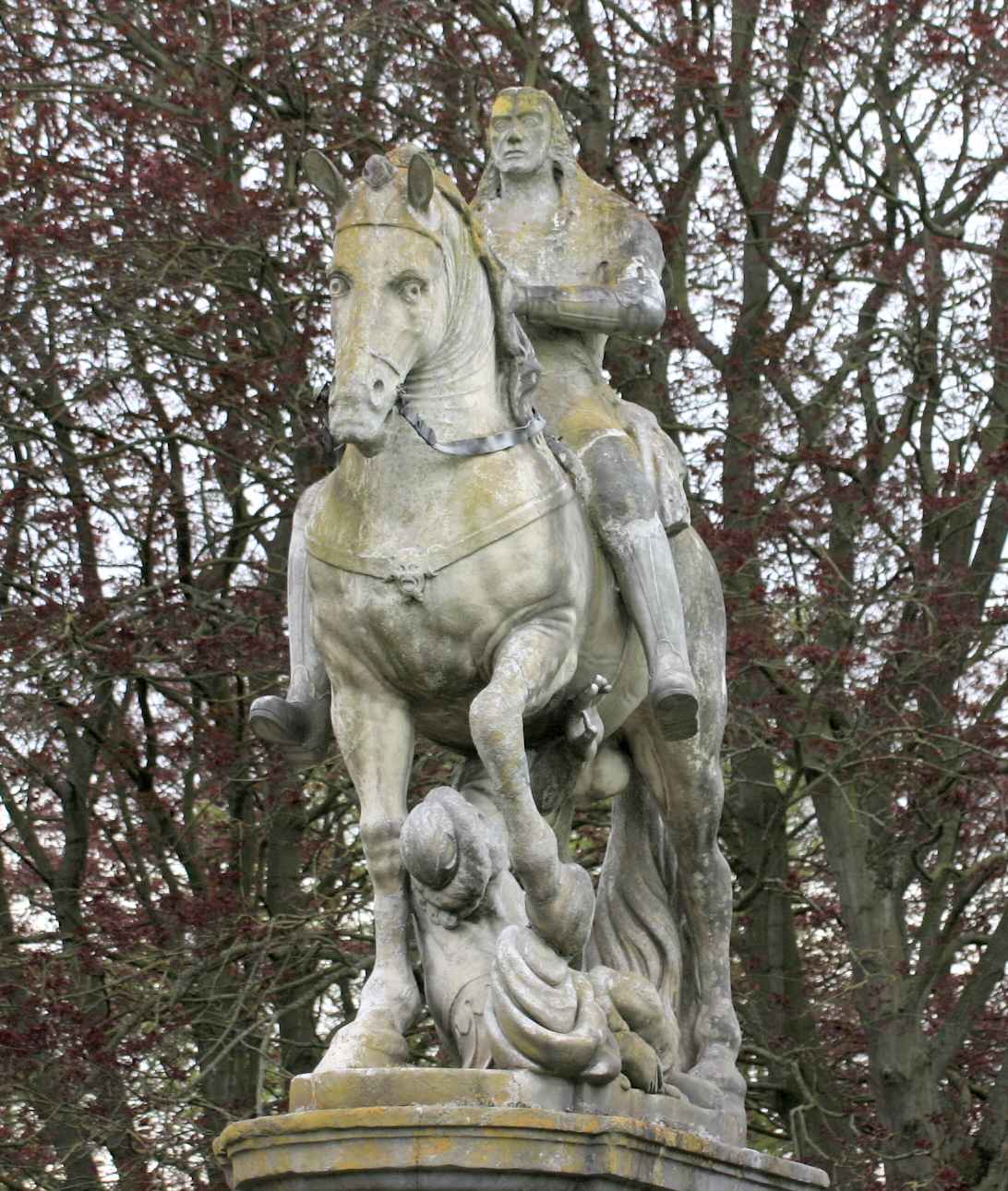 The statue was made in Italy and originally represented John Sobieski, King of Poland, trampling a Turk.

It commemorated his victory in Vienna.  The statue was bought in 1672 by Sir Robert Vyner (the goldsmith responsible for Charles II's Coronation regalia) who brought it to the Stocks Market, London at the Restoration.  Sir Robert had the head refashioned by Jaspar Latham - (see below) to represent Charles II and the lower figure represented Oliver Cromwell.

In 1739 the site was taken for the construction of the Mansion House and the statue was removed to an inn yard, then to the Vyner estate in Lincolnshire.  Lady Mary Robinson of Newby married Henry Vyner and inherited Newby Hall in 1859.  The statue was brought to Newby Park in 1883.


- the text below from A Biographical Dictionary of Sculptors in Britain, 1660-1851

Latham was one of the City of London’s leading mason contractors in the years after the Great Fire. As a sculptor he is remembered principally for his monument to Archbishop Sheldon at Croydon.


He was probably the son of another Jasper Latham, who was apprenticed to a mason, James Gilder, in 1621. He was married at St Giles-in-the-Fields by special licence on 21 December 1661, at which time he was described as a bachelor of about 25, and a mason and freeman of London. His wife was Elizabeth Sweete of St Giles Cripplegate (conceivably the daughter of W Sweet), ‘aged about nineteen’ (Armytage ed, 1890-92, 18). A son, Robert, joined the family business. In 1663 Latham's name was added to the yeomanry list of the Masons’ Company, but it was not until October 1678 that, at his own request, he came on to the livery and court of assistants. He became a renter warden of the company in 1689 but was never master.

Latham worked under Sir Christopher Wren as mason contractor for the rebuilding of St Mildred, Poultry in 1670-79, receiving Portland stone to the value of £324 5s 3d in part payment, besides £2909 11s 6d for masonry work and carved ornaments (8). Wren employed him again as one of his master masons at St Paul’s Cathedral, where he worked with Joshua Marshall, Thomas Wise I, Edward Pearce and Edward Strong I (10).

Between 1679 and 1690, Latham received over £10,000 in regular payments for masonry and carved ornaments, largely on the south side of the choir and on the north side of the nave. He was also one of the masons under Wren as surveyor-general at Hampton Court when, in December 1689, part of the new buildings collapsed, killing two workmen and injuring 11 more. William Talman, the comptroller of works, sought to blame his superior and Latham, who appears to been the mason responsible, weighed in with Talman to blame Wren for the tragedy. In 1690, when Wren dispensed with Latham’s services both at St Paul’s and at Hampton Court, Wren objected ‘against Mr Latham for a madman’ in the matter of a certificate relating to new building at Hampton Court (Cal. Treasury Books, 1689-92, 355, quoted by Knoop and Jones, 20).

His work as a sculptor first came to public attention in 1672, when he was living near Fleet Street on the fringe of the City of London. On 29 May 1672 the most conspicuous outdoor statue of the time was unveiled by the new water conduit at the Stocks Market near Lombard Street. It was an equestrian figure of Charles II on a lofty pedestal with a prostrate figure beneath the horse’s hooves (5). It was described on the following day in the London Gazette as ‘an Excellent Figure of His present Majesty on Horseback having a Turk or Enemy underfoot…of White Genova Marble, and bigger than the Life’. The statue appears to have started life as a representation of the Polish King, Jan Sobieski, carved in Italy by an unidentified sculptor. It was shipped to England and acquired by a London merchant, Sir Thomas Vyner, whose nephew, Robert, probably conceived the idea of transforming it into a statue of Charles II trampling on Oliver Cromwell. Latham carved the new head. According to George Vertue, ‘the head of the King was not done. Only a block fitt to carve. & was cutt by ... Latham a sculptor near fleet ditch’ (Vertue I, 129). The statue was first offered to the Joint Gresham Committee to stand in the centre of the Royal Exchange, but was declined because of its size, after which an alternative site was found in the Stocks Market. It was lampooned in a number of poems including A Dialogue between two Horses imagining the Royal horses in Charing Cross and the Stocks market in conversation. A later critic, James Ralph, condemned it as ‘a thing in itself so exceedingly ridiculous and absurd, that ’tis not in one’s power to look upon it without reflecting on the taste of those who set it up’ (Ralph 1734, 12). It was removed to make way for the Mansion House in 1737 and lay neglected for 40 years in a yard before eventually finding its way to Newby Hall in Yorkshire.

Only four funerary monuments by Latham are known, three of them without figures. The Grandison has an urn flanked by trophies above a pedestal, the Brome is a simple architectural tablet and the Chare is a graceful cartouche with a backing of feigned drapery, knotted at the upper corners (1-3). The monument to Gilbert Sheldon, Archbishop of Canterbury at Croydon, 1683, is of another order (4). The reclining effigy in mitre and clerical robes was originally set against a lofty architectural backdrop, decorated with putti and garlands. The frame was badly damaged when the church was destroyed by fire in 1867, but the effigy survives, together with the tomb chest which incorporates an intricate relief panel of skulls and bones. In the 1730s Vertue noted ‘Sheldons Monument his statue in Marble. A noble Mont…’ (Vertue IV, 49). It was admired by a 19th-century antiquarian visitor to the church: ‘There is a great individuality in the physiognomy of the prelate, which, together with the mitre, is very nicely sculptured ... the skulls in the central compartment … for manipulation, would successfully vie with the most renowned sculpture ...’ (Anderson 1855, 16-18). Sheldon’s niece married John Dolben, Archbishop of York, whose monument by Grinling Gibbons in York Minster, 1687-88, has close debts to Latham’s memorial.

In 1681 Latham completed a statue in lead of Captain Richard Maples, a benefactor of Trinity House, for which he was paid £45 (6). This was originally placed in the Trinity Almshouses at Deptford, but was moved in 1873 to the corporation’s almshouses in the Mile End Road and then to Trinity House itself during World War II. The imposing figure, originally posed on an inscribed pedestal, is presented in uniform with naval instruments at his feet. It was one of the first lead portrait statues in London and was painted to simulate stone.

Several of the City companies vied for the privilege of sponsoring a statue of Charles II for the line of kings in the quadrangle of the Royal Exchange. In 1684 the Grocers’ Company claimed the privilege since they had elected the King a freeman at the Restoration, but this did not prevent the Founders from commissioning the royal statue and Latham was their choice of artist. He had already begun work when the Grocers appealed that this was ‘an affront and wrong’ to their Company and he was forced to abandon his efforts (Grocers’ Co Minutes, Guildhall MS 11588, f.673, 6 June 1684, quoted by Gibson 1997 (2), 160).

The King’s statue was eventually provided by Arnold Quellin in 1686.

Latham was employed on building schemes in the City until shortly before his death. Between June 1670 and December 1671 he received regular payments totalling over £850 from the bankers Clayton and Morris for stonework at their offices in Cornhill and Old Jewry and in 1672 he carried out masonry work at their banking house in Hand Alley (Clayton & Morris fols 136v, 137v, 241v). He received small payments for stone-cutting from the Joiners’ Company, 1679-82. He became mason to the Mercers’ Company in 1682 and was City mason from 1687 until his death. He worked at the Royal Exchange between 1691 and 1693, assisted by his son, Robert, who continued at the Exchange after his father’s death and prepared the double niche for statues of William III and Mary II in 1695 by John Nost I, for which he was paid £40. Robert succeeded his father as City Mason and held the post until 1696. His appointments of a clerk, Edmund Poynter, and a mason, John Newton, in 1694 and 1695 respectively, are recorded in the Masons’ Company apprenticeship lists. Robert left England and was living in Port Mahon, Minorca, in 1713. Elizabeth Latham continued her husband’s business, executing masonry work for Newgate and the Council Chamber at Moorfields, for which she was paid £26 18s in 1696, and receiving payments from the Mercers’ Company until 1697.
Several of Latham’s apprentices, none of whom appears to have had a successful career as a sculptor, are listed in the records of the Masons’ Company. They include Richard Mapletoft, who was bound in 1664, James Burne, who may have been the ‘Bonne’ working on the Sheldon monument, bound in 1668, John Brookes (1689), William Heckford (1670) and James Broomhall (1679). The 1678 general search conducted by the Masons’ Company lists Latham as a ‘shopkeeper’ employing three men, one of whom was James Hardy.

In his will Latham left his widow Elizabeth ‘all my houses tenements Rents goods and Chattels’ which suggests that he died reasonably affluent. Abraham Storey was one of his executors. The quantity of memorials authenticated as Latham’s work is small. However, a considerable number of such works have been attributed to him, most of them swagged tablets, cartouche memorials and standing monuments surmounted by urns or portrait busts, but also several with crudely cut reclining, seated or standing effigies (C Lib repr). It seems likely that orders for sculpture formed an important part of a successful building practice.
IR

Portraits of the sculptor: ‘Latham (statuary). His head painted by Fuller leaning his hand on a bust’ (Vertue II, 59); untraced 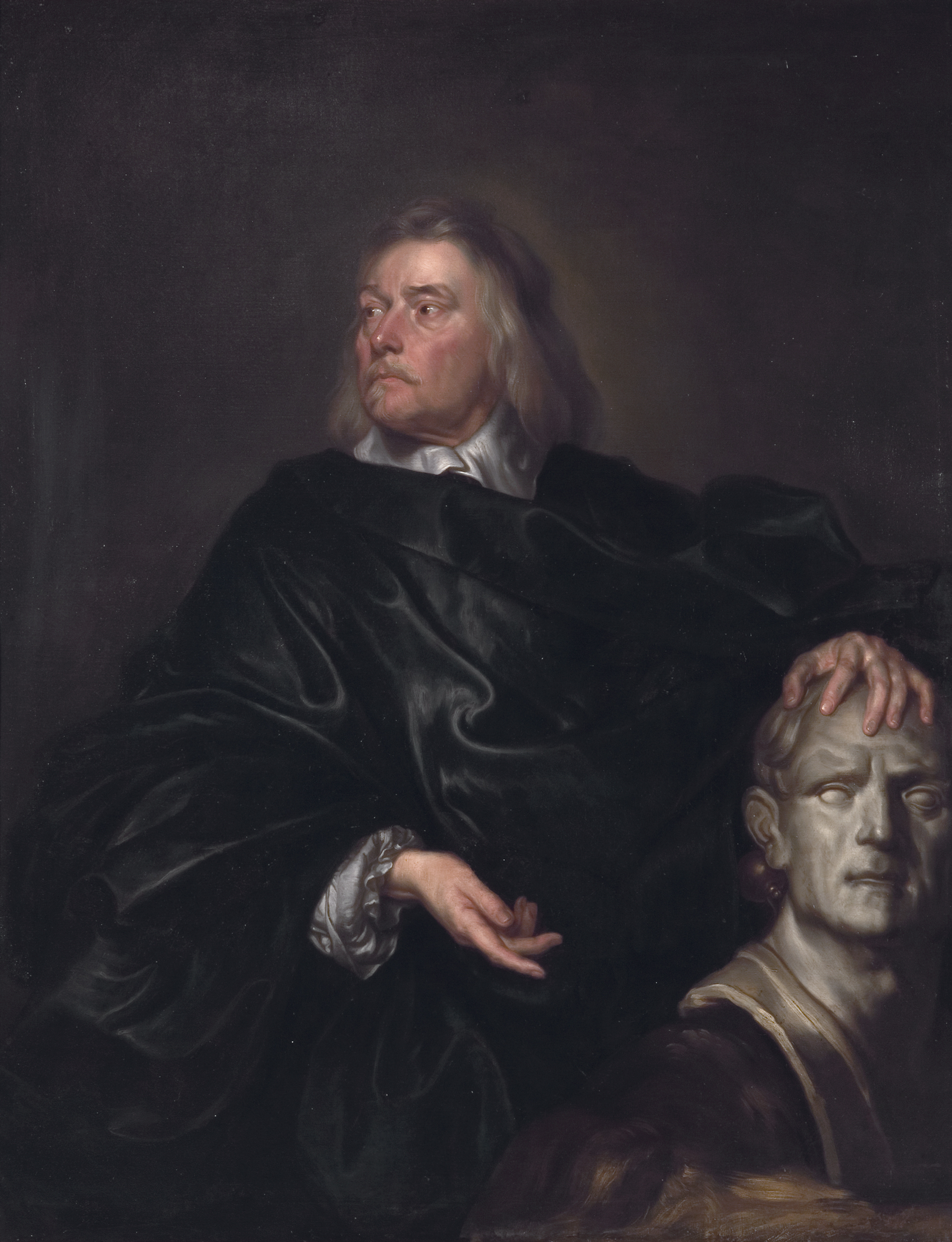 This attribution needs to be confirmed.

Is it perhaps the portrait of  Latham mentioned by Vertue and untraced? Anonymous engraving/
1680 -1714
234 x 259 cms
This is the bottom half of a plate, originally with representation of the statue of Charles I at Charing Cross above. The complete plate can be found in the fourth volume of the BM's 1724 edition of 'Britannia Illustrata', published by Joseph Smith.
British Museum

Lettered below image with title in English and in French, and with production details: "Jos Nichols Delin / H. Fletcher Sculp / Publish'd according to Act of Parliament 1753, & Sold by J. Boydell at the Unicorn the Corner of Queen Street Cheapside London". 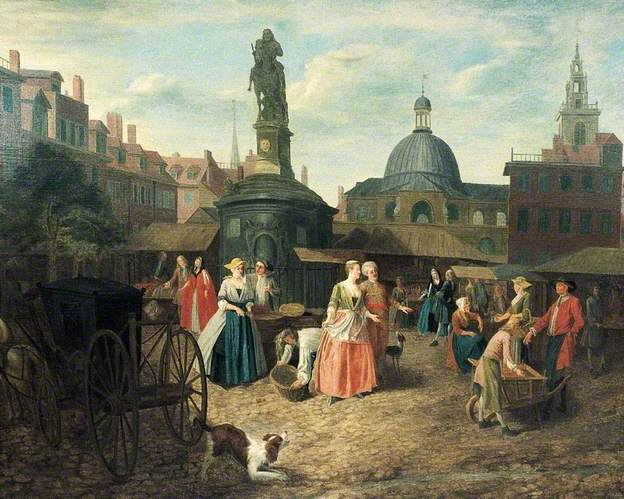 Posted by David Bridgwater at 06:56